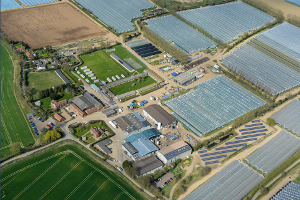 The company, which supplies 3,500 tonnes a year of fresh and frozen raspberries, strawberries and blackberries to supermarket chain like Tesco and Marks & Spencer, invested £205,000 ($300,000) in the 800-panel system, installed by EvoEnergy at its 900-acre farm.

Having doubled in size since 2009, the company’s operations had grown to include two blast-freeze tunnels, cold storage and dry goods stores – used 24-hours-a-day – which consumed 3 GWh of electricity each year. An 80 kWp rooftop solar PV had previously been installed on site.

Finance director for Place UK, James Starling, said: ‘PV was still a significant investment but it fitted the bill as an affordable option – and given that we knew we’d use all of the electricity ourselves it also mitigated against some of the risk of future energy price rises.’

Since the new system went live it has cut the firm’s electricity bills by 10% and with 280 kWp of solar generation on site, generates an estimated £30,000 per year in returns from the FiT.